A Tiny Chapel in the Countryside

This chapel full of myth and legend is built on a promontory just outside the village of Għarb, close to a cliff called Ras San Mitri (The Cape of St. Demetrius). Approached by a country road from Għarb, the chapel stands in a delightful spot and is Gozo’s westernmost chapel.

The original chapel was built sometime in the 15th Century, and it was mentioned in inquisitor Pietro Dusina’s 1575  report of his visit to the chapel. However, a pastoral visit on May 24th 1657 the chapel was found to be in a dilapidated state and thus deconsecrated.

This 15th Century chapel was rebuilt in 1736, creating the building that still stands today. It was blessed on the 11th April 1809. The chapel also had some restoration works done on it as recent as 2012. 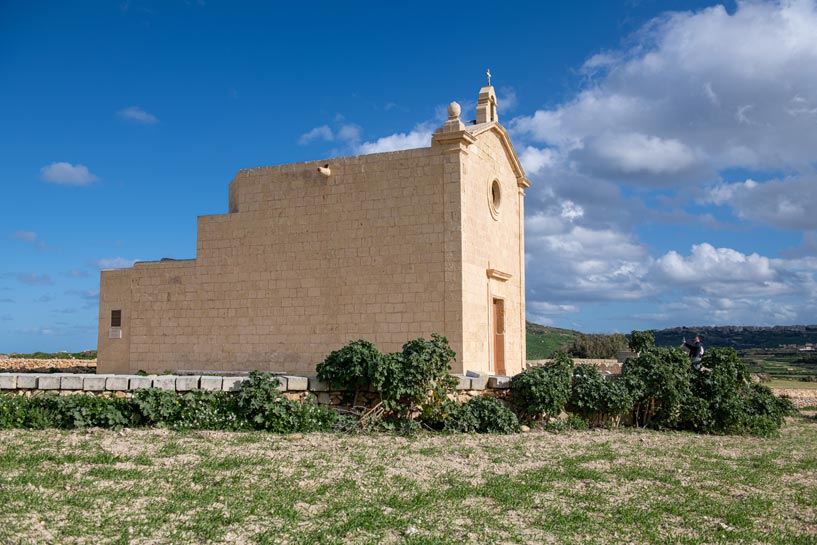 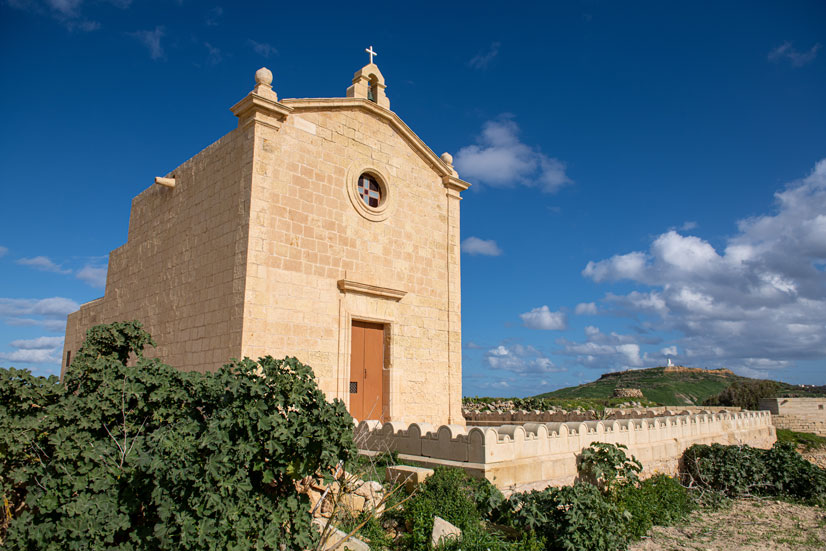 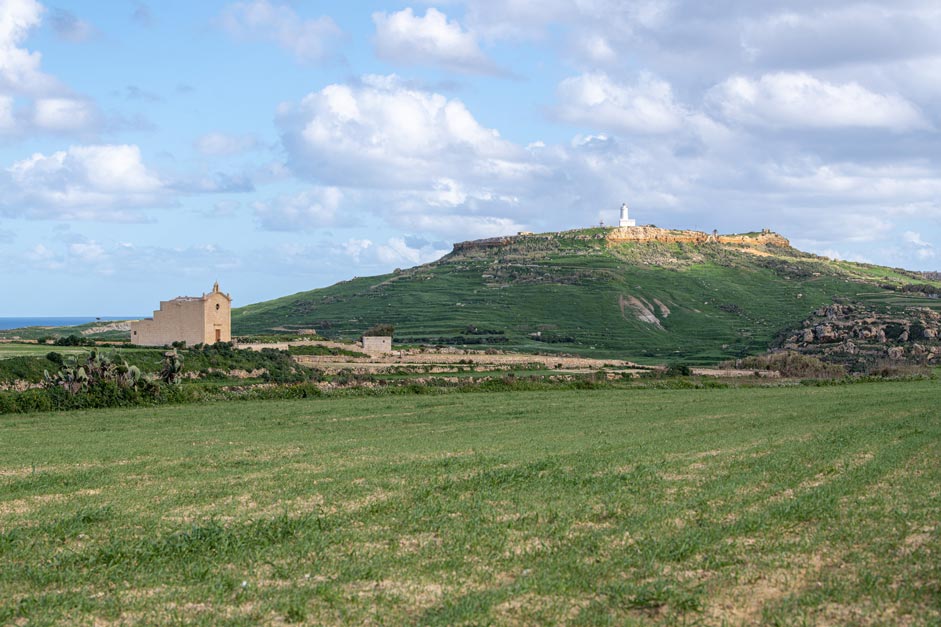 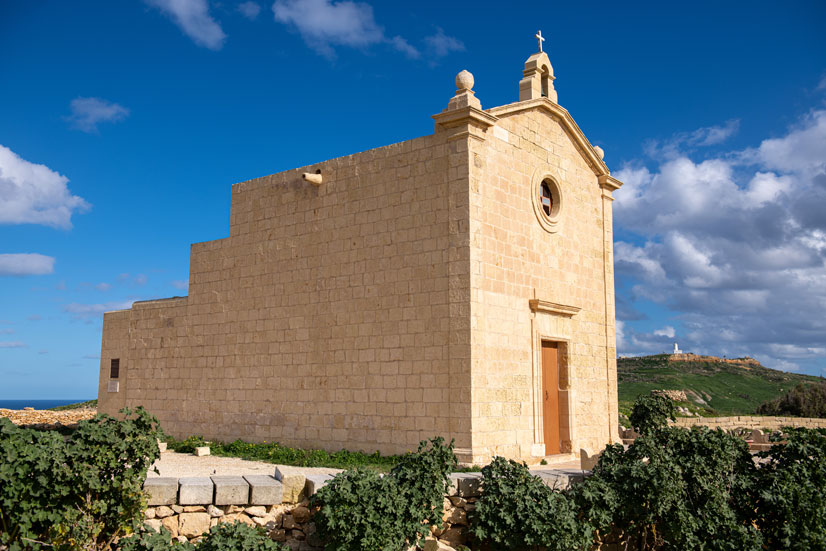 The altarpiece above the stone altar shows St. Demetrius on horseback with an old woman praying and a young man in chains. This relates to one of several legends about the chapel.

This legend – a favourite of historians and poets alike – tells how an old woman called Natalizja Cauchi, nicknamed Żgugina, was at home one night with her son Mathew when Barbary corsairs swooped on the island, broke into Żgugina’s house, knocked her down and made away with her son. The unfortunate woman ran weeping to St. Demetrius’ chapel and poured out her heart in passionate prayer, saying: “San Dimitri, bring me back my son, and I’ll light your lamp with a measure of oil.”

St. Demetrius heard her supplication. She saw him moving in the painting, whence he rode out in pursuit of the Turkish galley. Soon he was back holding the boy in his arms. He re-entered the picture, but a mark from his horse’s hoof remained imprinted on the rock. The grateful Zgugina kept a lamp lit to the saint day and night.

A coda to this legend has it that during an earthquake the rock on which this first chapel was built, broke off and fell into the sea but the chapel did not break up. Sailors and fishermen have often reported seeing light in the depths of the sea – Zgugina’s lamp still burning under the water! 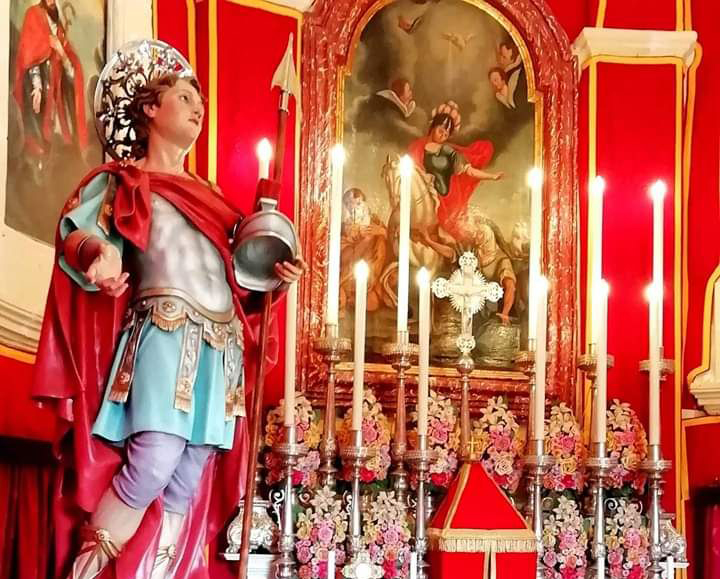 The main painting depicting St Demetrius dressed as a soldier on a horse with an old woman pleading with him on one side while a young man in chains is depicted on the other side. This painting represents a local legend which is narrated further below. The painting dates from 1810 and the painter is unknown. It was restored in 1937 by Wistin Camilleri. There are 2 other paintings on each side of the main altar, one representing St. Aristarchus and the other the Assumption of Mary. Other paintings depicts the martyrdom of St Demetrius and another of St Paul.

San Dimitri Chapel is one of the points included in the Ta’ Ġurdan Walk. You may access walk by clicking here. The walk is about 10km long and takes you to various attractions and points of interest in and around the village of Għarb.

Chapel's front door is always open to have a look inside.