Some things you should not miss next time you visit Dwejra

If you’ve ever watched the peaceful sunset from the craggy shoreline at Dwejra, you already know about the bewitching scene that descends on all those who gaze out at the view. If you’ve stood speechless in front of the ferocious foaming waves battling the seashore on a windy day, you also know about the dramas that the elements can whip up at this wonderful spot.

It is no coincidence that Dwejra has been a favourite backdrop for filmmakers. On this location, nature and geography aided by time, seem to have schemed to create a place like no other.

1. Walking around the coast in Dwejra, one cannot help but notice the composition of the rocks in the area that at times look like a mosaic made up of thousands of marine fossils.  The zone also features saltpans. The coastal area is very interesting to explore but care is to be taken in rough weather and it is not advisable to venture close to the edge of the shore.

2. The Inland Sea area which has been formed by a circular depression in the land, has created this unique lagoon, which has a quayside on one side and a pebbly beach on the other. The Inland Sea is connected to the main sea via a 100-metre tunnel that  is used by smaller kind of boats. Traditionally, the Inland Sea at Dwejra was a fishermen’s cove and the small fishermen’s huts are still standing, but today fishermen gladly take out tourists for boat trips.

3. No place in Gozo comes without a church or a chapel. Dwejra is no exception. Built in 1963, the Chapel dedicated to St. Anne has a kind of Hispanic architectural feel in terms of its exterior and it’s visited by devotees who come to pay homage to St. Anne.

4. Another point to visit is the Dwejra Tower. Acting as a sentinel against the pirates and marauders, and guarding the Fungus Rock, the tower has also played a part in the Second World War when it acted as a guard for the western side of Gozo.

5. Fungus Rock or the General’s Rock stands out prominently as a little islet. The rock has its own interesting story, about a precious medicinal plant growing here and because of which, it was heavily guarded. The Knights of St. John even levelled out its sides to ensure that climbing the rock was virtually an impossible task. Great punishment awaited those who were caught scaling the rock.  Back in time, a kind of primitive cable-car enabled access to the rock.

6. Beyond the Tower, lies Dwejra Bay, another circular depression in the rocks or sinkhole that has created a deep but spellbinding swimming spot. Often an anchor point for those touring the island on boat or yacht, this area is not highly accessible. In the area you’re bound to notice a small cave hewn out of rock. This was the shelter for the watchman who was on-duty guarding the Fungus Rock. In the vicinity of this cave, you can find a flight of steps that have been cut out of rock. This will bring down to the old slipway in the bay. 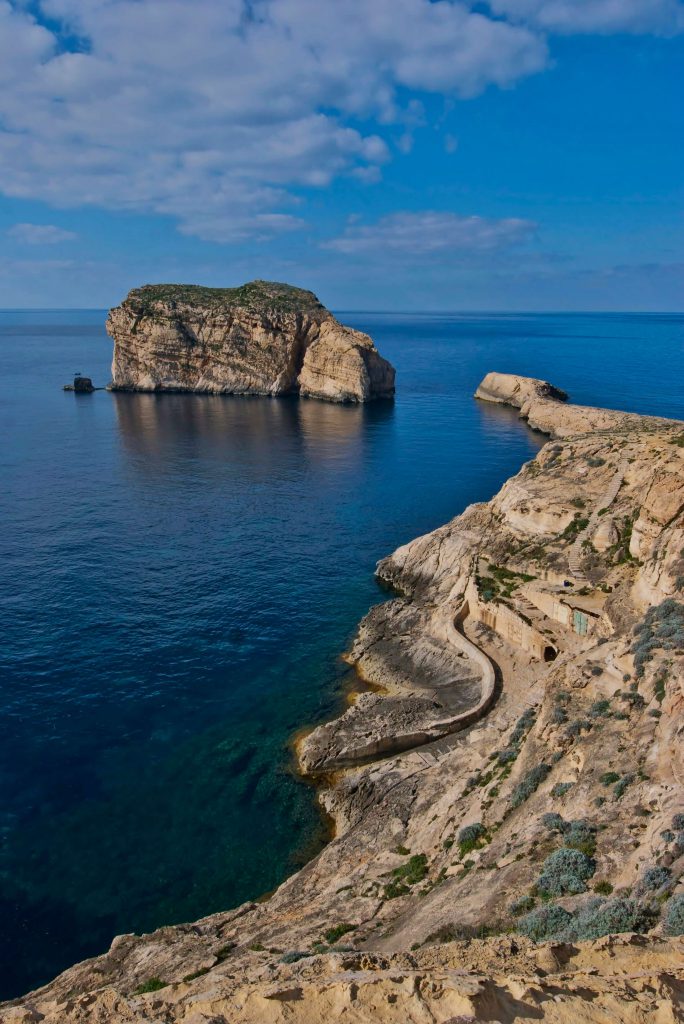 7. Crocodile Rock & The Blue Hole – Barely visible on windy days is Crocodile Rock, a pillar of rock that from land resembles the head and snout of a crocodile. The area is a favourite diving spot. The Blue Hole is an internationally acclaimed diving spot, that needs little introduction.    This vertical chimney, which Jacques Cousteau himself once earmarked as one of his top 10 diving spots in the world is a must for every serious diver. The Azure Window that collapsed in March 2017 is now another awesome spot to dive.

Visiting Dwejra is a true pleasure in all seasons!

READ NEXT: A Visit to Dwejra’s Coastal Tower