Exhibition is open Mondays, Fridays, Saturdays and Sundays 10am -1pm

When a raging sea swallowed the iconic Azure Window on March 8, 2017, there were many who felt the loss as deeply as they would the loss of a dear friend. For maybe 500 years Mother Nature had been slowly carving a hypnotic window out of the giant limestone outcrop on Dewjra’s coastline, some say a window into the soul of Gozo, and in one fell swoop she magnificently struck it down. The shock waves of this act of destruction reverberated across the Maltese islands and out into the world. The guardian of Dwejra was no longer.

French artist Patrice Pantin was one of those who understood that this majestic sculpture was more than just a tourist attraction. The untamed landscape of Dwejra, with the stoic arch standing guard, has long held a magical place in the hearts of those who are drawn to it. It is to those hearts that he now dedicates his latest exhibition: Tieqa tad-Dwejra – A Tribute to the Azure Window.

The series of mesmerising paintings, which are both pictorial and photographic, take their inspiration from six precious fragments of the arch that were brought to the surface from where the Tieqa tad-Dwejra now rests under the azure waters of the Mediterranean. Two of these stones sang out to Patrice, because when joined together they became two halves of a heart, symbolising the spiritual essence of this vanquished guardian.

In the words of the artist: “This small piece of limestone is like a miniature island. When you take this stone from the water, you seize the whole island. It is a detail but also the whole, another territorial extension like the map I made in 2015. The idea of death and body is emphasized by the drapes of a shroud revealed through the acrylic paint…”

“The black series evokes sculpture every bit as imposing as Azure Window could be: each piece, through its sheer size and black colour, highlights the romantic illusion of this guardian’s portrait. The white series, through its monochromatic photography, accentuates the feeling of abyssal void felt in face of such a submarine chaos and inspires a true lyrical experience of the senses.”

“What is left in your heart is the great absence; the stone is stronger because it is here without being here. It is what I call the hidden visible.”

Patrice lives and works in Pantin, near Paris, where for the last 20 years he has been honing the unique cloth technique he uses in this distinctive work. Tieqa tad-Dwejra is Patrice Pantin’s second offering to the Maltese Islands. His first work, a large map of the Maltese archipelago made using sand from a local beach, featured in the Contemporary Art Biennale in Mdina in 2015.
Lazuli Art Gallery, a Fair Trade gallery in the heart of Gozo’s capital, Victoria, will launch Patrice Pantin’s solo exhibition, Tieqa tad-Dwejra, on March 9, 2018. Charlotte Lombard, owner and curator of Lazuli Art, is dedicated to bringing new and exciting work from across the globe to Malta and Gozo; embracing cultural diversity and celebrating talented artists both local and foreign.

This exhibition is presented as an opportunity to honour Gozo’s heritage, and for people to come together to celebrate the beauty of art inspired by nature. Tieqa tad-Dwejra is both a triumph in technical prowess and a poignant reminder of the transient nature of life itself. 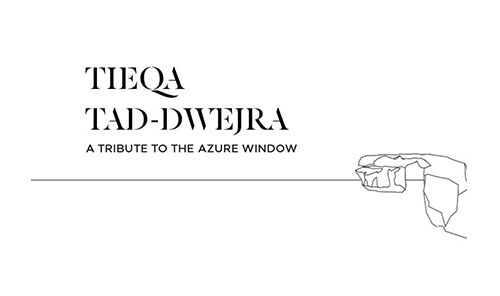