Wirt Ghawdex is holding a lecture entitled “The ta’ Braxia Cemetery” to be delivered by Dr. Conrad Thake jointly with Janica Buhagiar. The lecture will be held at the medieval Santa Cecilia Chapel in Ghajnsielem (near the Heliport) on Friday June 1 starting at 6:30pm. Seats can be reserved by emailing [email protected]

This lecture is based on the recently-published book of the same title.

The Ta’ Braxia cemetery at Pietà was designed and planned by the Maltese architect Emmanuele Luigi Galizia (1830–1907), the first extra-mural cemetery to be established in Malta. This book narrates the challenging religio-political context that prevailed during the mid-nineteenth century and the steadfast determination of the British colonial government, than headed by Governor Sir William Reid, to implement this project for the ‘formation of a cemetery at Ta’ Braxia for all denominations without distinction of creed’, even when faced by opposition from conservative Catholic quarters. It traces the foundation of the cemetery from its establishment in 1855–1857, to its physical expansion around 1880. It also considers the distinctive qualities and characteristics of a garden cemetery and the diverse typology and rich iconographical symbolism of the various funerary monuments at Ta’ Braxia. It also covers the origins and history of the Lady Rachel Hamilton Gordon chapel (1893–94) which is the main architectural icon of the cemetery.

Lecturers
Prof Conrad Thake is an architect, urban planner and architectural historian. He graduated with a Ph.D. degree in Architecture from the Universit of California, at Berkely, U.S.A. (1996). He has co-authored with the late Dr.Quentin Hughes the two volumes: ”Malta-The Baroque Island“(2003) and Malta-War & Peace, an Architectural Chronicle 1800-2000 (2005). He has published in several prestigious journals and he is a Salzburg fellow and a member of the International Committee of Architectural Critics.
Dr. Thake has served on the management board of various Governmental agencies such as The Development Control Commission, the Planning Appeals Board, the Mediterranean Conference Centre and the Valletta Rehabilitation Committee. He is currently an associate professor in the Department of Art and History of Art at the University of Malta.

Janica Buhagiar graduated in History of Art at the University of Malta(2010) and completed her post-graduate studies with a Masters degree in History of Art (2013), focusing on funerary art and architecture. She has co-authored with Prof Conrad Thake, “Ta’ Braxia Cemetery” (2017) and currently works with Heritage Malta as an assistant curator. 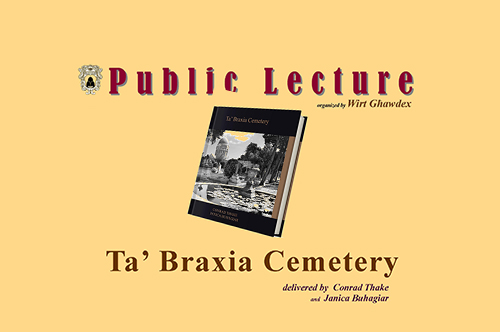